Some of you might remember this thread. Here's the folowup:

It's the largest sand island in the world. It's situated just off the coast of southern Queensland, Australia.

It's 123km long. It was discovered by Captain Cook in 1770. It's got half of the world's "perch lakes" (Bodies of water above sea level/water table) and it's got one of the most uncontaminated dingo gene pools in the world.

OK! To begin the tale. Day one. On the island.

We were initially going to buy some panniers (Saddlebags) from the shop but the AUD$120 price tag turned us off. They're home-made from thick canvas and brick-layers string. I asked Michelle (My gf) to stitch the HL2 logo on the side. She obliged.

Our plan was to start on the south end and see how far north we could get before needing to turn back to make it home in time. Here's a map of how we went:

The major factor that determined how far we could go in a day was the wind. We had a strong northerly wind (Blowing south) throughout the entire trip. T'was a complete bastard to ride into and a dream to ride with. The only reason we got so far on the first day was the fact that we were fresh and full of energy.

The first day of riding was pretty hellish. Really hot, into the wind and neither of us really had much water. We were in a pretty poor state when we reached Dilli Village where some nice people let us take some of their lovely rainwater. We sat under a tree for a good two hours just drinking water and recovering. We set out again and managed to make it a little further. We ended up camping directly between two no camping signs that we didn't notice at dusk. A nice ranger popped along in the morning and pointed that fact out to us. He didn't book us. :D More pix!

That's an airbed next to my bike there. That tarp draped over my bike? That was my tent for half the night. About 0300 I woke up freezing and sodden. The tarp had formed a pretty good seal around my body such that the moisture in my breath condensated on the inside of the tarp and dribbled down onto my sleeping bag. That and there was pretty heavy dew made the first night the worst of the trip.

My mate Carl is sitting on the tarp there, stealing my stuff.

Here's a pic of the fire we made on the first night.

We cooked up some really nice spag bol the night before and reheated it on the coals. Nummy.

Here's a shot of some endless beach for good measure.

This is the campsite we spent two nights at. Nice spot, a bit overused though. That masterpiece of impromptu tentage on the left there is my shelter for the night. Was much better than the night before but still cold.

Second night we ate pasta with a stir-though sauce. Edible but not really nice. The third night I cooked up some really good steaks we had in an eski. Came out perfect cooked in my pannikin over the coals.

On the third day we had some time to spare to do a bit of sightseeing. We decided to visit Lake Wabby:

Me out on a sandblow.

Interesting fact: The sandblow I'm standing on here is slowly creeping forward at the rate of about 3 meters per year. Eventually it will engulf Lake Wabby completely. Bummer.

This shot was taken over the side of one of the encroaching dunes. Doomed plants! 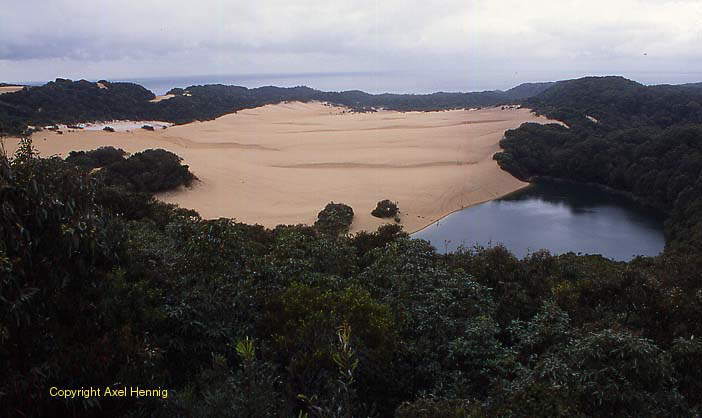 I didn't take this pic due to lack of wings. It shows the dune slowly swallowing Lake Wabby.

Here's a purdy shot of some flowers on the dune. Native bees galore!

On day four we set out really early to try and beat the tide to Eurong station. We just made it. We waited out the tide there while we restocked out water supplies, had breakfast (Cold, non-UHT milk. Mmmm.) and then headed off south again. We got the GPS out at one point and it clocked our speed at 17km/h. Pretty decent for a pushbike on sand. The tailwind helped a LOT.

On the way back we saw a big dune and decided to climb it. Here's a shot of our bikes from the top.

Here's our camp for the third night. Comfy log for campfire enjoyment.

The last night we ate an impromptu pasta dish made from pasta, powdered cheese sauce and two tins of tuna. Turned out to be a really nice tuna mornay.

The next day we took the barge back to the mainland and then rode another 15km back to the nearest town to be picked up by Carl's parents. All up we rode over 100km. Not too shabby. When we got back to Carl's parent's place we thoroughly hosed our bikes down, then degreased and regreased the chains. The salt and sand really beat them about. Good thing I'm in the market for a new pushbike anyhoo.

That's pretty much it. A great time was had by both of us. Next time we hope to dragoon some more people along and hopefully not go during the school holidays in order to minimise the tourist infestation.

A few more pictures to be found here.